This yearâ€™s Nobel laureate in economics[1], Angus Deaton (and his wife Anne Case, not to forget) has published an interesting study on mortality among white Americans compared to other groups and nationalities. Their astonishing findings can be illustrated in one single picture: 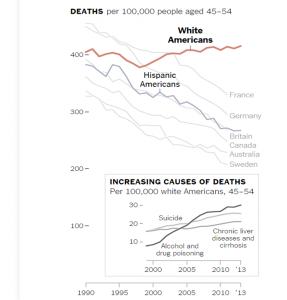 Immediate reasons behind the soaring death rate among white Americans are self destructive behavior patterns such as alcohol and drug abuse, or direct suicide. As an explanation on the next level Paul Krugman[2] suggests existential despair.

Krugman points to the similarities between this US experience and the plunging life expectancy in Russia after the capitalist revolution in the 1990s that claimed ten millions lives, mostly men in productive ages (a catastrophe we have mentioned repeatedly on these pages). Two American scholars, David Stuckler and Sanjay Basu, have described the post-communist mortality in The Body Economics: Why Austerity Kills (Basic Books, 2013). The following picture shows life expectancy from birth for men in USA and Russia: 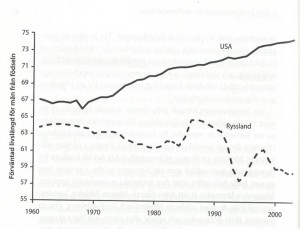 The Russian experience in the 1990s was really dire. Multi-millions of jobs disappeared. Many of the small and medium-sized â€œmono citiesâ€, with usually just one dominant factory, simply closed down, leaving abandoned and crumbling buildings and remnants of retired citizens behind. Men in productive ages couldnâ€™t bear it and accounted for most of the ten million who just disappeared for ever.

Astonishingly similar in Russia and US are the causes of death. In both countries alcohol and drug abuse play an important role, together with suicide. In Russia also other diagnoses soared, such as myocardial infarction among young men, otherwise rare. Stuckler & Sanjay mentions â€œsocial stressâ€ as a syndrome underlying the deaths. Many men seem to have an innate pride, requiring that they are able to support themselves and their families. Bereaved every possibility to fulfill this task they appear to lose the purpose of life.

Deaton & Case conclude that the absolute level of despair isnâ€™t the decisive factor behind the self destructive behavior. Instead they suggest that the middle-aged whites in America have â€œlost the narratives of their livesâ€. It seems to be more a question about the distance they have to fall when they exitÂ from a higher altitude. Or in Krugmanâ€™s words: â€œweâ€™re looking at people who were raised to believe in the American Dream, and are coping badly with its failure to come trueâ€.

Krugman again: â€œIf you believe the usual suspects on the right, itâ€™s all the fault of liberals. Generous social programs, they insist, have created a culture of dependency and despair, while secular humanists have undermined traditional values.â€ Itâ€™s exotic for a Swede that there are influential conservatives in the United States who believe the unbelievable, reject the obvious and denounce reason; more so that they dominate the Congress and threaten to capture the presidency; and are doing so supported by billions of dollars from the corporate sector. In the most powerful nationÂ that ever existed! The world must take a deep breath.

[1] This is an honor to mention only when one thinks the Prize Committee has made a decent choice. Otherwise itâ€™s an affront to Nobel that the Swedish National Bank instituted this prize in his name for something that perhaps Nobel, like many of us, wouldnâ€™t even call a real science.