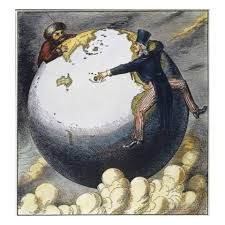 Looking forwardÂ  to what this new year will bring one may wonder if there indeed will occur some unexpected changes for the better in world affairs. For five hundred years we, the Europeans and our off-shoots, have held large parts of the world in a violent grip, mainly for the purpose of enriching and empowering ourselves.

We started by continuously slaughter each other in Europe, thus making war our favorite hobby. With development of modern weapons we got an upper hand globally, and made war a science. From that point on we started to afflict the world with unspeakable horror in order to enlarge and secure our imperialistic conquests.

As late as in my first years in school, some 60 years ago, imperialism was described as a benevolent enterprise, almost a sacrifice made by the white man to help and lift the bewildered herds. The fact that we blessed the poor savages with our civilization by enslaving and slaughtering them was not really recognized. Nor did we hear that our missionary work, much lauded by our teachers, was just a matter of exchanging one superstition for another.

We have in many ways continued to use blinkers to shade off the unpleasant consequences of our efforts to dominate the world. The prime concern has always been to keep the poor majority of people down (if necessary with mass killings). We used small elites in the conquered regions to ensure that wealth and recourses from around the world ultimately landed in the hands of our rich elite.

Our rampage naturally fostered resistance and uprisings. Up came â€œcommunismâ€, a repressive system perfect as a pretext for continued military actions against egalitarian movements wherever they appeared. We left millions of corpses on battlefields all over the world, and hundreds of millions more as a consequence of an economic system that deprived people of elementaryÂ living conditions. And we ended up praising ourselves as some kind of saints, affording the world â€œfreedom, democracy and human rightsâ€.

Blatantly racist colonialismâ€™s prime time ended in the 1960s, leaving room for more indirect, but no less effective, means of domination. In just recent years these methods too have met successful resistance here and there, perhaps most significantly in South America. With the convenient pretext â€œSoviet Communismâ€ gone there were further hopes for our violent tendencies to calm down, but such niceties doesnâ€™t fit our epigenetic habits.

â€œCommunismâ€ had been â€œthe single questionâ€, the all encompassing phenomenon we had to aim all our military capacity against. But that turned out to have been a lie for 40 years. As soon as the Berlin wall fell, we (US supported by EU) started to create capitalist Russia as the new suitable target, first by seceding large parts from the former Soviet territory, then by expanding NATO into Russiaâ€™s borders and installing offensive missile bases in Eastern Europe.

Finally we reached Ukraine, and the probably much anticipated Russian reaction took place. Our warmongers, for all their different reasons, got the fodder they had longed for.

And thatâ€™s where we are today. Letâ€™s see if reason, sensibility and consideration can play a part this coming year 2015.