(Back to keyboard after necessary disturbances of different kinds during some months.)

Has the presidential election in the United States anything to do in a postcard from Sweden? Well, we will all be affected by the outcome, one way or the other, and itâ€™s interesting and often telling to follow commentaries in our domestic MSM.

Most astonishing is the fact that income and wealth distribution, as well as justice and fairness, have come into focus, thanks mainly to Bernie Sanders. After decades of him tirelessly agitating from the back benches in the US Senate, to promote the interests of less affluent Americans, he surprisingly enters the center stage. (I happened to find him online some years ago, and have followed him with interest since. But until now I havenâ€™t seen a single word about him in Swedish MSM â€“ very typical).

From Noam Chomsky weâ€™ve learned that a majority of Americans since at least some 30 plus years have preferred a policy similar to Sanderâ€™s, but that an effective propaganda apparatus has produced election results often diametrically opposed to peopleâ€™s real wishes. But it seems as if the inequities finally have become too grotesque to conceal or brain wash away. And suddenly â€œeverybodyâ€ talks about wealth distribution and the other progressive issues.

â€œYes, the economy is rigged in favor of those at the topâ€ says Hillary Clinton; â€œThe deck is stacked against ordinary peopleâ€ writes New York Times (N. Kristof) the other day. He goes on to present a study by two scholars (M. Norton and D. Ariely) showing i.a. that 92 percent of Americans prefer a wealth distribution of a â€œSwedishâ€ type to the really existing one in the US. But this study has a serious flaw.

These are the three choices of wealth distribution laid before a group of nationally representative respondents (the labels â€œSwedenâ€, â€œEqualâ€ and â€œUSAâ€ were not shown to the respondents). 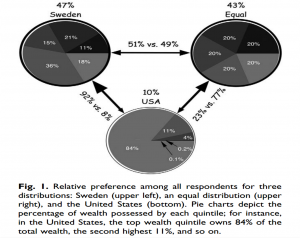 The authors reveal in a footnote that the pie chart named â€œSwedenâ€ depicts the income distribution, which was chosen solely to get some middle alternative between Equal and USA. The Swedish wealth distribution is something completely different, and in fact quite similar to the US one, as seen in this diagram:

The y-axis shows the sum of net wealth in billions SEK (Â§1 = appr. 9 SEK), debts subtracted, in the percentiles 1 to 10. Adding 9th and 10th percentiles one gets around 85 percent of total wealth, which is almost identical to the US figures. 60 percent of the population has no net assets at all.

Since Sweden endured its neoliberal, right-wing government (2006-14) the economic divide between rich and poor has grown faster than in any other European country. That government was lead by an empathy exempt man who as a young man was living an Ayn Randian wet dream. But thatâ€™s a story worth a separate chapter.